What is System? Characteristics, Elements, Types and System Approach. 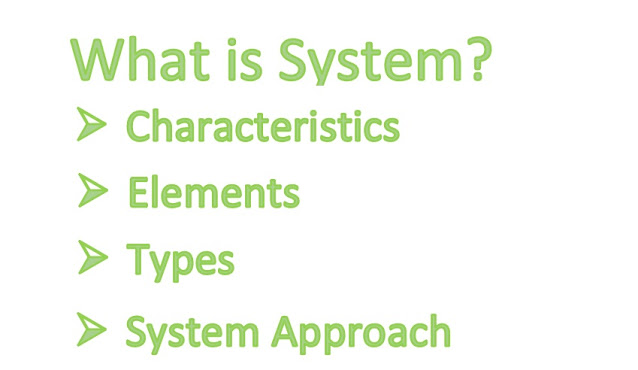 What is System? Characteristics, Elements, Types and System Approach.

The word system is derived from the Greek word “systema”, which means a organized relationship among the following unit or component.“A system is an orderly grouping of interdependent components linked together according to a plan to achieve a specific objective”.

The study of system has some basic implications:

Characteristics Of System :
Elements of a System :
The following are the key elements of a System :
Types of Systems :
The Systems Approach
The system approach is top took upon management as a system or as “an organised whole” made up of sub- systems integrated into a unity or orderly totality. Systems approach is based on the generalization that everything is inter-related and inter­dependent.

(i) A system consists of interacting elements. It is set of interrelated and interdependent parts arranged in a manner that produces a unified whole.

(ii) The various sub-systems should be studied in their inter-relationships rather, than in isolation from each other.

(iii) An organisational system has a boundary that determines which parts are internal and which are external.

(iv) A system does not exist in a vacuum. It receives information, material and energy from other systems as inputs. These inputs undergo a transformation process within a system and leave the system as output to other systems.

History of C and C++ Languages and There Difference.

bootpootin - January 14, 2023
History of C and C++ Languages and There Difference. C and C++ are both programming languages, but they have some key differences. C is a procedural...

bootpootin - July 18, 2022
Introduction to Data Warehouse A data warehouse is a relational database that is designed for query and analysis rather than for transaction processing. It usually...

bootpootin - July 18, 2022
Introduction to Advance Database System ABSTRACT Data is collection of raw facts and figure which is basic for decision making. Anything which is unorganized is called...

What is Ternary Operator in C programming with example

What is Conditional Statement in C programming